The most unpredictable start to a season in the MaxPreps era continues to deliver surprising results to shake up the Top 25 national high school basketball rankings as we reach the midseason mark.
No. 15 Minnehaha Academy (Minneapolis, Minn.) had two impressive wins over the weekend, knocking off previous No. 8 Sierra Canyon (Chatsworth, Calif.) 78-58 and Gopher State contender Park Center (Brooklyn Park) 89-68.
No. 18 Huntington Prep (Huntington, W. Va.) also shined as the Mountain State powerhouse notched a pair of wins over ranked opponents. The Irish knocked off previous No. 14 Roselle Catholic (Roselle, N.J.) 73-54 and No. 5 Sunrise Christian Academy (Bel Aire, Kan.) 62-54 at the Cancer Research Classic.
Other big games at the Cancer Research Classicincluded No. 4 Wasatch Academy (Mt. Pleasant, Utah) defeating previous No. 3 Paul VI (Fairfax, Va.) 57-53, No. 5 Sunrise Christian Academy taking down previous No. 6 La Lumiere (La Porte, Ind.) and No. 7 DeMatha (Hyattsville, Md.) downing previous No. 20 Mater Dei (Santa Ana, Calif.) 71-60.
The game that made the most national headlines last week was a showdown between previous No. 4 IMG Academy (Bradenton, Fla.) and Briarcrest Christian (Eads, Tenn.). The Saints upset the Ascenders 33-22, outscoring the defending national champions 21-4 in the second half while holding IMG to an abysmal 1-of-18 from the field in the final two periods.
The upcoming week features a handful of big games, including No. 11 Rancho Christian (Temecula, Calif.) vs. No. 17 Sierra Canyon, No. 7 DeMatha taking on both No. 19 St. John's (Washington, D.C.) and No. 20 Gonzaga (Washington, D.C.) and No. 13 Paul VI vs. No. 20 Gonzaga among others. 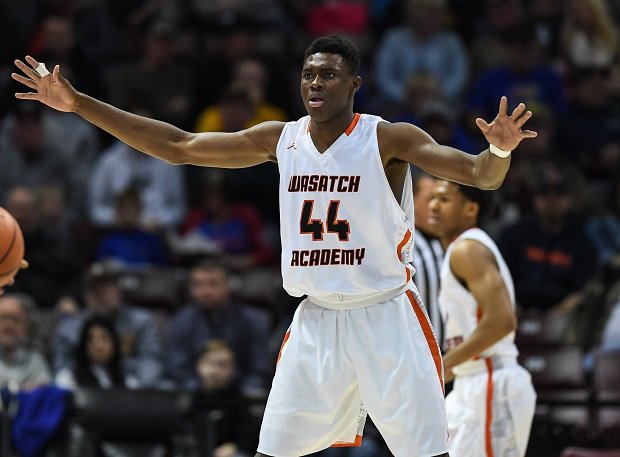 Paint anchor Mady Sissoko returned from injury over the weekend, powering the Tigers to quality wins over Roman Catholic (Philadelphia) 72-52 and previous No. 3 Paul VI (Fairfax, Va.) 57-53 at the Cancer Research Classic.

Finished 1-1 at the Cancer Research Classic, knocking off previous No. 6 La Lumiere 52-39 before falling to Huntington Prep 62-54. The Buffaloes remain at five, supported by a strong resume that includes wins over No. 7 DeMatha, No. 20 Gonzaga and No. 22 St. Frances Academy among others.

Captured a signature in-state victory over unbeaten Shiloh (Snellville) 72-60 over the weekend to solidify their position as the team to beat in the Peach State.

Jump back into the Top 10 after notching a quality 71-60 win over previous No. 20 Mater Dei (Santa Ana, Calif.) at the Cancer Research Classic. The Stags have a daunting week ahead, with road showdowns Jan. 7 against No. 20 Gonzaga and Jan. 9 at No. 19 St. John's.

The Cavaliers own an impressive mid-season resume, knocking off No. 18 Huntington Prep 70-54 and capturing titles at the Chick-fil-A Classic and Beach Ball Classic. Their lone loss came against No. 3 Oak Hill Academy.

Struggled over the weekend at the Cancer Research Classic, falling to No. 5 Sunrise Christian Academy 52-39 before defeating Roman Catholic (Philadelphia) 68-62.

A busy week lies ahead for the Crusaders, who have three games culminating with a matchup against unbeaten Rutgers Prep (Somerset, N.J.) at the Empire Invitational.

13. (3) Paul VI (Fairfax, Va.), 7-3A brutal week included three losses in seven days. A crucial week awaits this group as a Jan. 9 showdown with No. 20 Gonzaga could help the Panthers get back on track.

14. (4) IMG Academy (Bradenton, Fla.), 8-3
The Ascenders have struggled to gain their footing in the early going, falling to Briarcrest Christian (Eads, Tenn.) 32-22 without their star Jaden Springer.

Split a pair of meetings in Minnesota over the weekend, taking down previous No. 12 Patrick School 71-56 before losing to No. 15 Minnehaha Academy 78-58. The Trailblazers have an opportunity to avenge their loss to No. 11 Rancho Christian on Jan. 11.

18. (NR) Huntington Prep (Huntington, W. Va.), 13-4Jumps back into the rankings after a strong week at the Cancer Research Classic that included wins over previous No. 14 Roselle Catholic 73-54 and No. 5 Sunrise Christian Academy 62-54.

25. (25) Duncanville (Texas), 14-2
The top-ranked team from the Lone Star State have won nine consecutive games after pair of early season losses to No. 1 Montverde Academy and No. 17 Sierra Canyon.